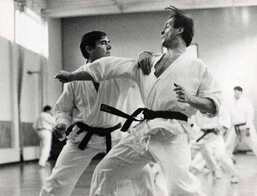 Billy started training in karate in the late nineteen sixties.  When he was a boy, he dabbled in a boxing club which trained Scottish champions in his local area.  Like most children in those days, he got into the cubs followed by scouting and while there was introduced to Judo before seriously getting involved in karate which he trained in for decades. After starting a new club of his own Billy got interested in accelerated learning to help his students learn quickly and then used these skills with his studies which helped him achieve City and Guilds in Engineering and in Manufacturing Technology.   He was then introduced to Neuro Linguistic Programming (NLP) followed by Developmental Behavioural Modelling (DBM) and qualified as a Trainer.  During this time Billy went back to academic learning an gained a BSC in Quality and Technology and an HNC in Information Technology.  Billy also used these skills to question, test and redefine the learning processes of the various martial arts he connected with including Tai Chi, Judo, Aikido, Taekwondo, Yoga etc, as a way of speeding up and improving the learning processes towards self-defense for himself and his students.  Billy continues to study, scrutinise, test and develop ways of helping people learn martial arts efficiently.